Women, Societal Expectations of Beauty, and “The Devil Wears Prada” (2006)

The Devil Wears Prada operates on binaries. On the one hand, it passes the Bechdel test and gets women out of the home under the man, but in a recasting of the Cinderella story, it reinforces all of the other stereotypes that control and confine women. Keep reading for full details!

TDWP also has three male characters who have meaningful roles.

Additionally, there are several other scenes with additional male and female characters, an unusual number of these men and women have names and verbalized speaking lines.

As I have written about before, the majority of films in Hollywood cinema fail the Bechdel Test. Originating in 1985, this test looks for movies that have:

TDWP passes this test with flying colors. In fact, Miranda, Emily, and Andy almost never talk about men with each other at all, at least not directly. Even in conversations between male and female characters, the conversation is almost exclusively about women and initiated by women. (In most films, if there is any male in the scene, he begins and continues the conversation and women respond.) When TDWP is not exclusively about women, it is almost always equally about the male and female character, such as in scenes with Andy and Nate.

The Bechdel Test was designed to be the most minimal measure of filmic representations of women. That this movie passes when most do not is huge. That the movie passes to such a large degree and truly does center on women is also very significant, especially when considering the number of films that only pass by a hair strand.

This test does not, however, measure whether or not a movie is entertaining or fair to women. I argue that TDWP is not fair to women (or even men for that matter): TDWP is about women wearing makeup, high heels, and starving in order to be “pretty.” The male director’s overall message in TDWP is simple: in order to be successful, women must give into unrealistic and unhealthy notions of beauty, and they need a man.

These characteristics are best described through a focus on Andy.

TDWP opens with camera shots of Andy getting ready for the day. Suddenly I See is playing, which essentially describes what a “beautiful girl” is supposed to look like. See the lyrics here. (When have we ever seen a movie play a song where standards for male beauty are described?) We also see Miranda for the first time, and in an example of excessive male gaze, the camera focuses first and only on her legs for several seconds.

Andy before her makeover

At the beginning, when Andy is interviewing for a position as Miranda’s assistant, she is immediately criticized for being unacceptable and horrible because of her total neglect of fashion, as Miranda, Emily, Nigel, and others put it. They directly criticize her for not being skinny and not being glamorous. Andy is dressed perfectly fine according to any reasonable everyday notion for appropriate business attire. Given the media’s general message that women need to be so skinny they develop eating disorders, it deserves mentioning that Andy is far from overweight (and even if she is, such comments are totally unacceptable and serve as an all too common form of sexual harassment). Her colleagues and boss, however, are not happy until she transforms her hair, makeup, shoes, and clothing. 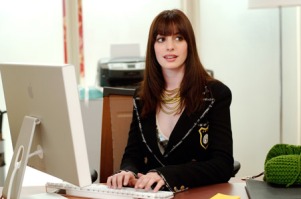 Andy after the makeover

Only after this transformation, do they respect Andy. Before this makeover, Andy constantly struggles answering the phone and keeping up with her boss’s endless and unreasonable requests. After the makeover, however, Andy does everything perfectly and quickly replaces Emily as first assistant as Emily is falling behind. Granted, due to social pressures and personal feelings, outward appearance can have legitimate impacts on self-image, self-esteem, and self-efficacy, but the transformation here is not reasonable. Andy also has conversations with her dad (who gives her money to help pay bills), boyfriend, and friends where she indicates the torture is worth it, that it’s only for a year, and that it is the only way to eventually get a good job. After the big show in Paris, Andy decides to quit her job working with Miranda as she realizes the fashion world is not for her. At the end, we see her interviewing for a newspaper job – a job that she (presumably) receives because Miranda told her new boss he would be an idiot not to hire her.

The film’s three primary male characters speak to the societal message that women need a man. There is never a time when Andy doesn’t actively need a man or have a boyfriend/lover. The film begins with Andy kissing Nate, her boyfriend/domestic partner, as she leaves for her interview to work for Miranda. We see them eating together and eating with friends a few more times. They take a break from seeing each other during the brief period Andy is in Paris. The scene immediately before the film ends shows them eating and visiting together as a couple again. While being perfectly fine as an actor, Nate’s role does nothing to advance the plot beyond reinforcing the message that women need a man. Although, Nate is the most well rounded, multidimensional character: We see him happy, angry, and sad.

During the breakup, Andy immediately has a brief affair with Christian, which begins with he “kiss rapes” her until she finally consents. Christian is older than Andy, and he is an icon in the fashion industry. She originally met him at a party while running errands for Miranda and ran into him a few times after that. Once Christian saved Andy’s job as he knew the appropriate contacts to secure the transcripts of the not-yet-released Harry Potter book Miranda’s kids demanded.

The other male character, Nigel, while eventually a friend of Andy’s, is always fully absorbed in the fashion industry. He believes women need him in order to look “beautiful.” He is impressed when Andy is finally interested in “looking nice” and further impressed with she drops to a size 4 from a size 6. 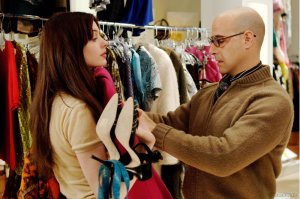 On two occasions, TDWP directly yet very briefly speaks to two important topics related to how women are subjected to double standards. In one instance, Andy defends Miranda by saying she has to be much tougher and much meaner than a man would have to be to even have an opportunity of being heard and respected. (This particular element—the “devil” boss—in TDWP could be cathartic for many individuals since so many people have to deal with unreasonable bosses.)

In the other instance, Emily says to get anywhere you always have to be panicky, nauseous, and suicidal; although, she doesn’t seem to be saying this in protest as much as in frustration with how things really are. Other than this scene, Emily, who hasn’t eaten in weeks, has completely sold herself to Miranda and to looking the part, even when she has the flu and a broken leg from being hit by a car while running Miranda’s personal errands.

There never is a true critique of these realities in TDWP. It’s presented as this is the way it is. There is also never a critique of women having to be “beautiful” in order to advance. This holds true even though Andy leaves the job with Miranda at the end because she gets the job at the newspaper only because she worked for Miranda and only because she changed her outward appearance while working for Miranda, as the movie makes very clear to viewers.

When I analyze film and other cultural artifacts, I generally subscribe to the theory known as “the death of the author.” This theory says that the author’s original intent (and by extension, actor’s and actress’s intent or interest) does not matter for purposes of intellectual inquiries. This approach is relevant for my purposes since I look at the connection between films and deeper social messages, culture, and history. Meryl Streep, one of the leading actresses in TDWP, is clearly the best or among the best performers in the United States today. Her career and the opportunities provided to many other social and political minorities by way of being actors and actresses is most important. But we still must critique the films, especially when they reinforce the same stereotypes that promote and celebrate racist or sexist mores.

(Note: I fully acknowledge that some consider “actress” to be sexist and offensive. In light of classes I have had on feminism and my knowledge of history in general, however, I find “actress” the most appropriate term because it specifically recognizes the accomplishments and roles of females. Nonetheless, I do not intend anything offensive by not using so-called gender-neutral diction. Given the overwhelming extent to which “masculinenormality” dominates our culture, I would argue that there is no such thing as “gender-neutral” words.)

Even though TDWP provides these very important public roles to women, it is no different than all of the other movies, magazines, and fashion shows, for example, that pressure women into thinking they need to “look” at certain way. Where as in TDWP these pressures are glamorous and stressful, in real life these pressures cause many real women to develop real and serious eating disorders, drug problems, and/or depression.

Click through the following four images for a few examples of how media manipulates all of us:

I’m sometimes criticized for analyzing films. These critics say that movies are meant to be enjoyed, not critiqued, and that I am a bad scholar for trying to analyze everything. Some of these comments even come from other scholars. My position is that we must analyze everything and anything because everything, especially movies and the like, are full of carefully crafted, targeted, and agenda-ridden themes. TDWP shows this more bluntly than many other films.

“But this is History. Distance yourselves. Our perspective on the past alters. Looking back, immediately in front of us is dead ground. We don’t see it, and because we don’t see it this means that there is no period so remote as the recent past. And one of the historian’s jobs is to anticipate what our perspective of that period will be”

Like Loading...
‹ 19 Things I’ve Learned about Teaching Undergraduates (so far)
Live these 15 tips (and less than 300 words) and I Guarantee Your Success in College ›