The seventh installment in my interview series spotlights the experience and wisdom of (the future Dr.) Ali Mroue! I first met Ali in the Spring 2013 when he was a student in one of my United States History from 1877 Lab classes at the University of Houston. Ali was a remarkable student–in terms of his academic talent, dedication, and friendliness–and we have stayed in regular contact over the years. Ali and I talked today: Keep reading to learn about his life before and after his time at the University of Houston in his own words! 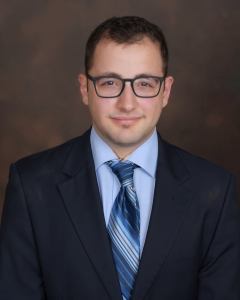 Dr. Andrew Joseph Pegoda (AJP): Hey, Ali. I’m so excited to talk with you for my blog and to get your perspective since you have such a unique background compared to most people I know!

Ali Mroue (AM): Thank you, Dr. Pegoda, for giving me the opportunity.

AJP: Absolutely. Thank you! Can you tell us some about who you are, where you are from, and what’s currently going on in your life?

AM: I am a Lebanese American. I lived most of my young life in the Middle East in Lebanon and am currently living in Houston. I recently graduated with a BS in Biology and Minor in Chemistry from the University of Houston. Currently, I work as a Gross/Lab Technician at a dermatopathology lab based in Houston and am in the process of applying to medical school.

AJP: Sounds like you’ve had a really busy couple of years! To continue, can you please tell us more about where you are from and about your childhood? I understand that you have seen a great deal of war firsthand.

AM: When I was very young, my parents wanted me to learn more about my culture and my roots, so we moved to Lebanon after briefly living in various places in Africa, in the Caribbean, and in the U.S. My family had just escaped a civil war in Africa that I was too young to even remember. It was the civil war in Sierra Leone, not sure if you’ve seen the movie Blood Diamond, but that’s what it was. When we were in Lebanon, there was always a sense of tension, and war broke out twice. Once in 1996 and another time in 2006. The 2006 war is the one scarred in my memory. It was between Hezbollah and Israel. The worst part about it is civilian casualty felt like an afterthought, and everyone was fair game. We would always hear “the terrorist group is hiding amongst civilians” as a justification to the killings. My most vivid memory is being in a basement with a bunch of other people praying and reading Qurans, while we could hear bombs dropping around us. Hoping it would not drop on our building. Thankfully, United States and European ships came to pick their citizens up from the shores of Lebanon. Luckily, I was a US citizen, so we were able to escape unharmed. The journey did not end there. My memory may be faulty, but what I do remember is the ship dropping us off in Cyprus, an island nearby while they tried to figure out how each of us would get to our respective countries. Eventually a US military plane came for us and dropped us off in Washington DC. It was a relief hearing welcome back home from Marines as soon as we arrived.

AJP: I am also curious to know more about what you have said about how religion and politics are very much connected in Lebanon and influence everything, including who can be in what office. Can you tell us more?

AM: Because Lebanon is the most religiously diverse country in the Middle East, there is always a power struggle. North Lebanon is predominantly Christian, and South Lebanon is predominantly Muslim. In addition, the government recognizes 18 religious sects. While this has many positives, which include going to school with different kinds of people and sometimes understanding each other and forming a community no matter what religion you belong to. It has plenty of negatives, too. In Lebanon, certain religions are assigned positions in the government. For example, only a Maronite Christian can become President, only a Sunni Muslim can become the Prime Minister, and only a Shiite Muslim can become the Speaker of Parliament. Which is a bit weird because as a non-religious Lebanese American who was born in Africa, I technically cannot aspire to become president. The way the government is set up causes the formation of many political organizations. Even in elementary school, your classmates would ask you what religion your family is from and what political group they support. You are immediately judged no matter what answer you give. This causes a lot of tension, and because of this there are always arguments and fights about how the government is controlled. In my 12 years of living there, I only saw arguments and fights, no discussion and solutions. Our economy there is severely damaged, and to make things worse we recently elected a president after two years when the groups couldn’t agree who to elect. During that period, I witnessed Lebanon go through the “Garbage crisis” where the government couldn’t figure out what to do with the trash people threw away, so it just gathered in the streets.

AJP: What’s a common misconception people have about Lebanon and the related politics and religion that really bothers you?

AM: A common misconception is that Lebanon is predominantly Muslim and controlled by a Muslim government – where women have to wear head scarfs or cannot drive or cannot divorce. This is completely wrong. In Lebanon, none of those are mandatory or banned. Women and Men can marry and divorce, wear whatever they want, and in recent years, Lebanon has been making progress for the LGBT community, too. In Lebanon, drinking alcohol, clubs, partying, and freedom of expression are all legal. Unlike some other middle eastern country, Lebanon is very liberal and a great tourist destination during peaceful times. It has beautiful beaches and mountains. You can go to the beach in the morning and be in the mountain tops skiing by the evening. Most people speak at least 3 languages, Arabic, English and French.

AJP: That’s really interesting that Lebanon can be so violent and war-like but also very liberal and welcoming. Can you elaborate on the stark contrast here?

AM: The reason Lebanon is very liberal is because we don’t have one religious figure or one person saying what we can and cannot do. There is no majority religion. Before the 1975 civil war, Lebanon was known as the Paris of the middle east, where everyone wanted to visit and go. However, after some of the core Lebanese values stuck, but the country has been shrouded with arguments on how to steer it in the future. Basically because of the civil war, it brought a lot of hate between people. Which is why Lebanon is the way it is now. Our economy was severely affected, and areas where I lived still only get Electricity only 12-16 hours a day. The civil war was between Christians and Muslims (North and South), by the way.

AJP: Can you tell us how and why you came to the United States?

AM: Because my father is American, I was born with U.S. citizenship. I did a little bit of elementary school here, but eventually went back and lived most of my childhood and teens there. I decided to come back after my first year in college due to the political environment in Lebanon. In addition to the cronyism there, I did not feel like I would be able to progress in life being from an underprivileged family. I decided to come to the United States where a sense of meritocracy exists.

AJP: From your perspective and experience, how are the dynamics of religion and politics different in the United States?

AM: I feel like here, a majority of people don’t really care about what you believe in. They won’t go out of their way to ask you. In my experience, even in elementary school other students would ask if your parents are with X or with Y? Like everyone was part of some kind of club. If you belong to this religious group then why do you support Y? Some people would kill friendships on the very basis of what you stand for. Here, people are more open-minded and willing to listen to different perspectives. Albeit, I don’t want to make the mistake of generalizing.

AJP: How was your time at the University of Houston?

AM: I was amazed when I first arrived. Classes were so large, yet professors cared about their students. What I especially loved is that getting an “A” in a class does not mean memorize everything word-by-word. There were different ways you could excel and learn more. For example, a lot of professors sacrificed additional time to explain stuff to me outside of class that I did not understand. I’m not trying to imply all professors weren’t like that at my old university, but I did not feel the same engagement there except from a handful of professors. In addition to the vast amount of extracurricular activities. I absolutely loved my time at the University of Houston, and I’m proud to call myself a UH COUGAR!

AJP: I am so happy that you are currently working on your applications for medical school. What drew you to medicine?

AM: There is not one single thing that drew me to medicine. It has been a culmination of my life events that have carved this path for me. Being exposed to many sides of human nature starting in a war-torn country, to my time at the University of Houston, to time in the emergency room as a scribe, and to as a lab technician now. I am eager to fight for humanity, to learn more about human nature, and to make my mark on society in my life time.

AJP: What else do you want to tell my readers?

AM: The Jeita Grotto, located in Lebanon, should be one of the Seven Wonders of the World!

Also, in Beirut, Lebanon, there is a Church and a Mosque next door to each other.

Finally, I would also like to thank them for reading this, and hopefully they are able to see a different perspective of Lebanon and the environment there.

AJP: Thanks so much, Ali. I know my readers will love learning about you.

AM: Thank you for having me, Dr. Pegoda.

To read other exciting interviews in this series, please click here. Don’t forget you can sign up for email updates and/or follow this blog on Facebook, Twitter, or WordPress (look on the far right if you’re using a Desktop computer, on the bottom if you’re on a tablet or phone).