Home › Thoughts and Perspectives › Obamacare is Saving My Life. Will you let me live?

Obamacare is Saving My Life. Will you let me live?

No one is born voluntarily. Even more, no one asks to be born with permanent disorders and diseases.

And because of capitalism and its inhumane nature, people like me “cost” millions of additional dollars over a lifetime in order to live. And this is largely due to being born in the United States. The United States is the only so-called “first world country” that doesn’t guarantee basic survival. Having “Medicaid for all” is the only true option.

My entire life has been dependent on having very good insurance because in the United States one can only get good healthcare with very good insurance. Because part time professors generally do not get insurance (just like part time employees across the nation generally do not get insurance – even though we end up working the equivalent of several full time jobs), I have been on Obamacare insurance since January 2014. And starting in December 2016, I have been on insurance with the University of Houston because of how they calculate working hours and because of how they interpret and follow Obamacare rules.

My life depends on having quality insurance and quality healthcare. In the last month alone, I have had three MRIs (each one can easily cost $10,000+ before insurance), doctors visits with a half dozen or more specialists (including a surgeon), and have had a minor eye procedure. In the next month, I see another surgeon and the heart doctor. Because of how life is not valued in the United States and because of how selfish the insurance industry is, these visits are insanely expensive. I am on 13 medications now, too.

But because I have Obamcare insurance, most of it is covered, and for what isn’t covered, I will be paying $30 a month for the rest of my life and will die one day indebted financially to M.D. Anderson Cancer Center – but they don’t need the money!

During my time with insurance because of Obamacare, I have had easily $300,000++ in medical bills covered.

Republicans in D.C. continue to show how little they actually care about the people they represent. By even advocating the repeal of Obamacare right now, they are seconds away from being murderers. It baffles me that anybody voted for them since they ran on something of one single issue–killing millions of fellow citizens. 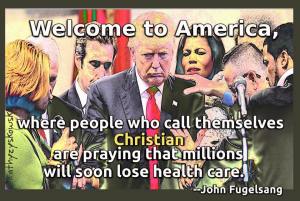