As we move through our world, because such movement is so everyday, we seldom stop to consider the obvious. I frequently think about what clothing signifies to others, specifically the ways in which clothing is racialized. What follows are working thoughts. Please add your own to the comments. 🙂

As we move around at school, work, or while shopping, we are always “performing” – most people perform gender, voluntarily and involuntarily, in ways that are immediately classified as either male or female. But, we don’t think about the process of race as much in this case.

For one thing, the idea is that, for example, black pants, a white shirt, tie, and sport coat tends to be, historically and culturally, racialized as White. This type of clothing was the stereotypical dress code for (White) men of the 40s/50s/60s who had professional jobs or went to college. These opportunities were not available to individuals racialized as Black. In cases, because of the culture of segregation, such clothes were not always even available to non-Whites.

Think of how the clothing Black maids wear in The Help is clearly racialized as Black and gendered as female. Such a uniform automatically results in assumptions about social class, education, and thus race and the lack of Whiteness. Whiteness=power and opportunity.

Clothing is far more than what we wear to “be decent” in public and keep our bodies clean and warm, it communicates many, many nonverbal messages that our brains automatically process.

Another example would be a “performance” or “uniform” consisting of a backward hat, baggie shirt, and baggie and low-sitting pants. Such clothing is classified as “trashy.” And the people wearing such clothing might be racialized, per se, as Mexican, Black, or perhaps “White trash.” “Pull your pants up” signs embody code-racism and occasionally, perpetuate problematic notions of politics of respectability.

For wealthy/privileged folks, our clothing, including makeup for those who use it, indicates conscious and unconscious rhetorical choices about the kind of messages we want to send to others. These messages have cultural connotations related to wealth, authority, safety, status; and thus racialization, given historical and on-going significance of racialization and vastly differing economic opportunities.

For example, some studies show those who are dressed formally are less likely to be robbed or attack. Being “dressed up,” a culturally constructed notion made by the status quo, indicates real or unreal wealth and thus Whiteness or access to Whiteness, per se.

One problem develops because not everyone can afford the cost and upkeep of “nice clothing.” Looking at issues beyond clothing and racialization per se but connected when considering intersectionality, not everyone is comfortable wearing such clothing or being required to conform to cisnormative cultures. (See, (I Hate) Professional Boy Drag“)

Different clothes not only make a person look very different–usually my preferred outfit is black jeans and a long sleeve gray shirt, not dress pants and a dress shirt–they communicate a variety of messages. So, as you get dressed and move around the world, please consider the ways in which your clothing is racialized and more importantly, the consequences of this for others. Try to avoid “looking nice” as simply a perpetuation of Whiteness and White Privilege. Be conscious of what such clothing signifies when life requires it.

None of this is to say we should stop “seeing” racialization–such is an impossibility, we see it, and we need to see it to have any hope of making continued progress.

Clothing, of course, is also sexualized, genderized, etc., etc and influenced by such mores. Height and weight and body shape also influence these factors and racialization–all of which are related to clothing, too.

And much of our clothing is made by individuals in horrible working conditions. 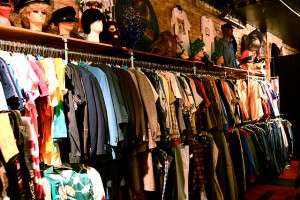