I’m always kind of frustrated when I hear people refer to the United States as “America” or to its residents as “Americans.” Since 2009, I have been saying that people in the U.S. are best thought of as United Statesians.

As I see it, “America” most accurately refers to over sixteen million square miles in North and South America and “American(s)” to the approximately one billion (that’s 1,000,000,000) peoples who call these lands home.

By not using “American”/ “America” we (un)consciously remember all of the other peoples and nations who surround the United States.

Given the United States’s long, unwelcome assertion of imperialism around the world generally and in this hemisphere specifically, this small change in diction is a start that empowers everyone to have a broader and more complete perspective.

We should look for as many opportunities as possible to recognize other countries and to examine how the United States interacts with them. Additionally, in our speaking and writing, we should be careful to not think of the United States as the “default.”

Words always matter. Thinking about the specific words we use and what they truly mean is always vital, as this series has hopefuly articualted again and again, 26 times now! 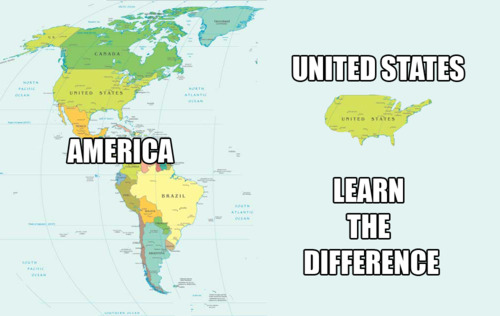