Home › Thoughts and Perspectives › Cloaked in Whiteness: Today’s reactions to Donald Trump show how sick the United States is.

Cloaked in Whiteness: Today’s reactions to Donald Trump show how sick the United States is.

People across the Internet are finally uniting in their opposition toward Donald Trump. People are finally saying he has crossed the fine. Republican politicians, including John McCain and Condoleezza Rice and Paul Ryan are finally voicing opposition.

The United States has a long History of being ultra concerned about the purity of White women. And about its belief that White women need extra protection from society. Due to the legacies of racialized enslavement, the connections between Whiteness and freedom, and institutionalized racism, society often cares little about non-White lives.

This helps explain the sudden outcry. If we had a moral, anti-racist society and a society not build on racism and Whiteness, we would have seen THE SAME vocal opposition of Trump’s classist and racist comments that we are seeing today in the aftermath of news about Trump’s behavior that can only be classified as assault, rape, and criminal.

Whiteness even helps explain Condoleezza Rice’s sudden opposition to Trump. As bell hooks explains, given we live in a racist society and a society committed to the Imperialist White Supremacist Capitalist Patriarchy, almost every one in this society–even non-White people–is very much interconnected with Whiteness and its protection. Rice has built on a career on protecting the status quo and Whiteness and hurting minorities. She, and other GOP politicans, knows that when Whiteness and Womanhood are threatend, their power might be threatend too. 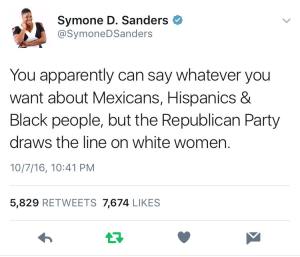 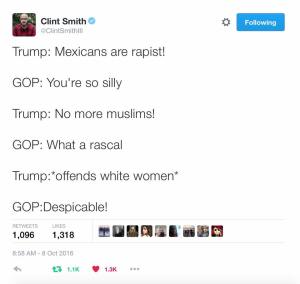 It is especially troubling to see comments by women today who still support Donald Trump, who still believe that Hillary Clinton has “killed millions,” who are afraid to talk about the Culture of Rape for what it is and the consequences of it.

Readers need to remember that Whiteness is not about individuals. Whiteness is a force so large and powerful in society that none of us can see it, and, sadly, none of us can do a whole lot to change it. It’s embodied in the very foundations of the United States.

Shaun King put it well earlier today on Facebook: “The only real blessing of Donald Trump is that he has truly allowed us to see the bigoted, sexist, oppressive soul of America.”

Anytime society en masse opposes something we know that Whiteness and/or Patriarchy are being challenged, as previously exemplified by its opposition to equal marriage:

Trump has built such a base and has given legitimate voice to so many different kinds of hatred, if he withdrawals or if more and more politicians oppose him and if the GOP really withholds his funding, etc., it is likely only going to further perpetuate the worse forms of Whiteness in some way as sexism still reigns and unites far too many men.

What will happen next?

Like Loading...
‹ The People Deemed Too Expensive To Live – the Crisis of Health Care in 2016
Conflicting Subjectivities – Haiku Series, #14 ›