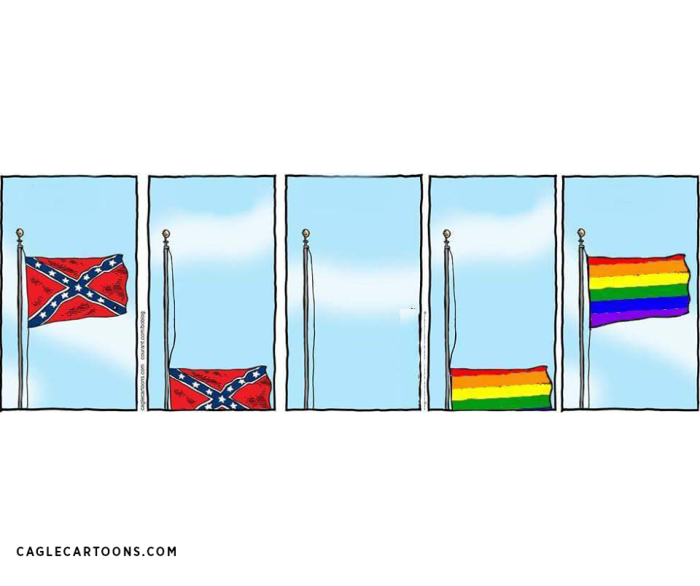 The above meme has been going close to viral on social media today. Somewhat surprisingly, the Southern Poverty Law Center shared it, where it has received a fairly positive reception. While the meme hopefully intends to celebrate positive steps, Dr. Jo Davis-McElligatt’s comments on Facebook got me thinking about this meme. This blog post is happening because of her critical reading of this meme.

She said, in part:

If you posted with sincerity that cartoon of the Confederate flag being lowered and the rainbow flag being raised, I encourage you to think twice about the way that cartoon makes trivial the suffering of black queer folk, especially trans PoC, several of whom have lost their lives recently in vicious hate crimes. That image also makes trivial the deaths of those nine people, including Clementa Pickney, who was laid to rest today. You can’t tell me that this ruling IN ANY WAY impacts structural or systemic racism.

Please consider that marriage equality DOES NOT impact white supremacy. This cartoon, if anything, is an extension of a privileged view that does not make a distinction between various modes of structural oppression.
In other words: it’s an offensive image you might want to delete from your feed. If you want to keep it up, consider posting a message challenging its false and harmful equivalency.

First, it suggests that the Confederate flag has been completely taken town in public and private domains and thus that racism is over. This relates to why I made this blog about things I’d rather seen happen than the Confederate flag removed (and taken off shelves and auction websites). Just because the flag is down does not mean anything has actually changed. This meme also promotes notions that we have finally moved passed the point of needing to talk about the flag or related issues of racism, enslavement, murder, etc. As Jo said, this is especially disrespectful on the day of Rev. Clementa Pinckney’s funeral. (BTW, you’ve got to hear President Obama sing Amazing Grace.)

Additionally, this meme suggests that there is a liner progression from one event to the next and that they are connected. The timeline of these events, beyond connections possible because of hermeneutical readings and general context of our era, is purely an accident of time and place and individual differences and individual behaviors. This perpetuates fundamental, wide-spread misunderstandings about the nature of history, historical moments, and how historians work. Worse, it suggests that en masse institutional, systemic change is as simple, easy, and everyday as raising and lowering different flags. And by extension, suggests that every one will go along with said changes and that such changes are universally “good.”

Equally concerning, this meme suggests today’s SCOTUS ruling is the ultimate, end achievement for us LGBT folks and our allies (the flag is at the top). This ignores that a deep and important tradition for some LGBT folks is to avoid marriage and all such similar things at all costs because of its roots in the status quo. Most, of course, deeply and dearly have wanted the right to marry. More importantly for the immediate future, this meme ignores, as one headline put it, that LGBT people married today, can be fired Monday. LGBT discrimination is still legal in most places.

This meme also neglects to recognize intersectionality. People of Color who fall into LGBT/non-heteronormative categories exists, and they are going to have a harder time, due to the status quo, than White LGBTs. And the “LGBT” grouping is far from a homogenous group. (See this excellent article.)

Another possible and problematic reading of the meme, is that the Confederate and Rainbow flags are “equal” in some ways: equal in terms of their power, the imagined communities represented, etc. Such is inaccurate, offensive, problematic, and potentially unpatriotic at the same time. I could see someone reading this meme and come to the conclusion that the Rainbow Flag is as disrespectful and hateful as the Confederate flag and/or that LGBTs are really going to take over the nation and force everyone to convert and/or that LGBT rights are more important than anything else now and we can forget about Black rights and/or other rhetorics that would set the progression of rights back.

It’s so disturbing to see that Confederate flag disappear and the rainbow flag appear, when we all know that the world is just as racist, homophobic, patriarchal, and transphobic as it was yesterday, and that the consequences of that hate are unevenly meted out.

Today is a day to celebrate and a day to mourn.

Our celebrations for marriage equality must only be very brief. The fight for freedom, for all people, from the status quo is more important and more urgent and more intense and more opposed all the time.

As bell hooks says, those who fight for freedom cannot rest.