Home › Thoughts and Perspectives › Verisimilitudinous Democracy: Neo-Voter Suppression and the Age of the Inability to do Anything

Verisimilitudinous Democracy: Neo-Voter Suppression and the Age of the Inability to do Anything

Regular readers will know that I am a proponent that history repeats itself. This evening I was reading this article posted by a friend and a new conceptual framework came to me to describe voting in the United States–neo-voter suppression.

When the United States was formed, as we all know, only wealthy, landowning, the educated could vote (a.k.a., wealthy, landowning, educated White [cisgendered] men). Voter suppression has been a huge part of our nation’s history. One gradual change came with the mid-19th century revolutions. The 15th amendment very briefly eased voter suppression for Black men. The 19th amendment gave women a political voice – kind of. Poll taxes, literacy tests, and other asinine requirements, when considering ideals of our ideal nation, represented new forms of voter suppression.

Jump forward to the early 21st century. ID laws make it especially hard for women, younger voters and college students, and poor people to vote. People convicted of felonies can lose their right to vote for life. All of these are forms of voter suppression, and they have real consequences.

But, when I talk about neo-voter suppression, I am specifically thinking about, recognizing, and internalizing that my vote and your vote does not particularly matter. As I wrote about recently, we are living in the middle of a Conservative Consensus. Democrats and Republicans have very few differences when examining their rhetoric or actual actions. This includes the evil, mean, destroyer-of-democracy President Obama. (Being sarcastic about him being evil – some didn’t catch that! But most serious about him functioning as a conservative.) Moreover, neo-voter suppression is a reality because big money (i.e., CEOs) or the status quo actually controls and has controlled society at large when it comes to economics and politics. The now-cliche “if voting made any difference, it would be illegal” (contributed to a variety of thinkers including Mark Twain, Emma Goldman) rings true. Voter suppression has been more outward in the past. Today we have the appearance of having a voice but don’t particularly have one at the national level or in states without the ability to have grassroots elections and recalls.

(If we had a more active citizenry and/or a society that encouraged vigorous debate, maybe we too could have a simple, quick election to pass equal marriage.)

Think of all the things that should, could, and would be different if we had a society where voting was truly a priority and made tangible differences.

Related to all of this is the regular frustration I feel when hearing and reading about things happening in our world today. I mean, we live in a state where Republicans (supposedly proponents of small, local government) can pass a bill banning local prohibitions of fracking – when they know fracking is in a very real, very immediate way – killing us. Sure I can blog or talk to my representative (strike that, he only talks to people who agree with him), but these strategies only go so far. The average person these days has so little power to make large-scale differences. And, yes, this is not a new problem, but with the environmental changes, to name one example, such practices will have more dire consequences. 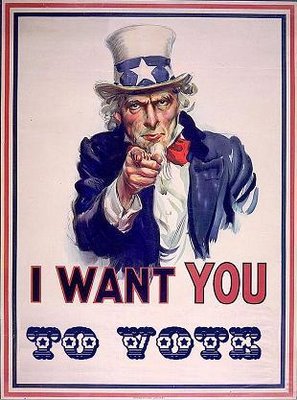