When we teach classes, do we think about our classes as consisting of students or citizens?

“Students” denotes a much more temporary relationship and one where, in so-called traditional classrooms, the professor delivers information which the students learn (e.g., memorize and master) – called the “banking” method of education by Paulo Freire. Even in environments grounded in adult learning theories and active learning strategies, “students” are there, temporarily, to learn and study and move on after earning degrees. The definition of student even is “a person who is studying at a school or college.” “At” being a key word describing this one-sided relationship where “students” are given little agency or any real role. “Studying” is inherently vague and passive.

Using “Citizens”—think of “citizens” of a contemporary nation state and associated rights and duties—requires we think about the larger relationship between all of the people involved, learning and teaching, and academia. If we teach “citizens,” we are talking about a “society”- one that best functions with some kind of unity; although, for sure, not purely homogenous societies. We are talking about teaching people how to contribute to society, in and/or out of academia, in meaningful ways, ways grounded in knowledge and analysis. This line of thought is different than goals of making “life long learners,” per se.

“Citizens,” from one perspective as suggested in Keywords for American Cultural Studies, are those who have some kind of close relationships among strangers. Histories, institutions, demographics, and/or similar factors help these “strangers” have some kind of unity. Being enrolled in classes, ideally in the pursuit of knowledge, gives people a definite unity.

“Citizens” (think “social contract”) also have responsibilities to actively read, write, and ask questions of anything and everything and everyone. Citizens receive opportunities and advice and in turn, use that to advance their own knowledge and life and to give back and further the number of places where intellectually riggirous conversations are wanted, needed, and/or valued.

Notions of uniting concepts of citizenship and academia also deserve special care. For example, there are constantly (unnecessary, quasi-racist, and privilege-driven) conversations about who can and cannot be a citizen of the United States. Academia should be open to all people interested and willing to study. This helps provide an important critique and reminder that we need to always make sure academia is open and accessible. Costs should not be a prohibitor. Geography, with options to study online (which is by no means free of its own problems), is no longer the barrier it once was. Additionally, looking at academia as a quasi-nation, gives us the opportunity to consider how, when, where, and why academia asserts its authority (or “sovereignty”) over knowledge across society and should prompt us to ask when and if this is appropriate.

By using “citizens” instead of “students,” we can better create life long learners and give people the opportunity to have a deep and meaningful college experience. 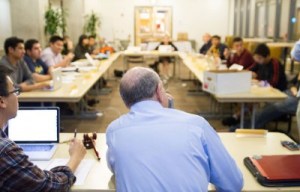