Traditions related to Santa Clause are not new or unheard of; although, they are increasing and manifesting in new ways, such as with the Elf on a Shelf tradition.

From a psychological perspective, the Elf brings fears predicted in 1984 and that increasing have very real manifestations to life. (Side note: Overall, Brave New World’s predictions have been more accurate. Brave New World foresaw a dangerous world in which information would not be censored but its people would be so intensely distracted on soma they wouldn’t care to be informed, as suggested by some.)

The Elf also depends on a kind of dangerous behavior modification plan.

And the Elf represents and privileges heteronormative, cis, and White/non-Black individuals.  And, of course, Santa is almost always White.

Another problem with the Santa Myth was described very appropriately in a meme I saw earlier this week. It went something like this:

Parents: Give children expensive gifts such as an iPad directly from you, not Santa. Children shouldn’t have to try and understand why Santa gives some kids expensive electronics and others cloths or a basketball.

This example helps us further see the classism, capitalism, and Middle-Class Privilege built into the Santa tradition.

In many cases, therefore, Santa discriminates by pre-existing economic statuses. Or rather, parents/guardians use Santa as a way to be further blind to their economic privilege / Middle-Class/Upper-Class Privilege.

One additional aspect of the Santa tradition kept me up last night: According to myth, Santa’s helpers (elves) spend all year making toys for the good boys and girls (good = rich??). In reality, who makes these toys and other presents? Men, Women, Boys, and Girls in horrible working conditions in China or other countries which exploit workers even more than they are in the United States. Therefore, Santa Myths delete the poor people who actually make presents and give White people credit. Additionally, why give Santa and his team credit for things people actually spend hard-earned money to buy? The Santa tradition is kind of communist when you think about it!

Be sure to read this excellent blog for information about how Rudolph is also problematic. 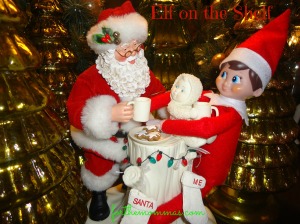