Home › Thoughts and Perspectives › The United States IS Uneducated, NOT Fragmented & A Brief Case Study in Religion and Marriage Rights

The United States IS Uneducated, NOT Fragmented & A Brief Case Study in Religion and Marriage Rights

This is probably mostly preaching to the choir, considering my audience. But a rant is in order.

Yes, of course, the United States is fragmented, but the real cause is rooted in vast anti-intellectualism, not increasingly divergent mores. People in the United States are far too absorbed in television, social media, various online or video games, and other rituals that consciously and unconsciously confirm and further embed preexisting cultural, moral, and social foundations. This anti-intellectualism is rooted in a religious and political culture that more and more often promotes, quiet literally, critical thinking as being the equivalent to devil worship. There are also roots in biology: We are preprogrammed to resist learning and thinking, but this part of our biology and physiology can easily be “rewritten.”

But as Galileo said:
“I do not feel obliged to believe that the same God who has endowed us with senses, reason, and intellect has intended us to forgo their use and by some other means to give us knowledge which we can attain by them.”

Life, regardless of worldviews and ideologies, should be grounded in never-ceasing learning and questions. People should never have an opinion about that which they know nothing or very, very little. Seeing one or two shows on the history channel about racism and civil rights does not qualify a person to engage in significant conversations about these topics. This is NOT to say everyone needs a Ph.D. to have an opinion.

All of the social issues currently plaguing the nation—gun rights, marriage rights, voting rights, health care rights, immigrant rights, welfare rights, environmental rights, and freedom of expression rights, for example—could easily be solved by a small dose of education and basic, legitimate concern for fellow humans. This is not to advocate the elimination of various points of view or to suggest different ideas would go away, especially in regard to issues such as with gun rights or welfare rights, but there could be a much more informed debate occurring.

With a small dose of education and open-mindedness, tensions would go way, and our nation could focus on much more meaningful issues.

Utah became the 18th state to affirm the right of marriage to two consenting people of age a few days ago. Appeals were immediately filled citing all kinds of bogus concerns. Conservative Christians need to understand three major points:

The Constitution, not the Bible, is the law in the United States.
While the Constitution (as both a document and a metaphor for laws in the nation) has always been outright ignored in various ways, this does not negate the responsibility to push for its further implementation. People should vote beyond their personal mores in favor of equality and opportunity. The only limit to freedom of equality, movement, and opportunity should be things that HURT other people. Corporations, Republicans, and the top 1% and 2% are the real ones hurting the nation and the world.

The Bible is a very poor source for citing prohibitions on marriage rights.
This can be tackled from a variety of perspectives. First and most importantly, all of the “clobber verses” were deliberately rewritten to have anti-gay readings over the past century. Their true original meanings were completely different. Read this article for more details. The important lesson here is that the study and use of any text cannot be conducted without considering context and translation issues. Moreover, it must be remembered that the Bible is a highly selected construction of a whole variety of ancient texts and that the notion of the Bible being the “divine word of God” is, historically speaking, brand new—around one hundred years. See this article and its videos for more on this last point. The study of History is also brand new, historically speaking. The Bible cannot fully be considered a “historical text” because when it was written “history” was not intended to be objective or exact at all. (This does not negate the importance of the Bible to Christianity.) Those who still hold firm to Biblical-supported homophobia and limitation of human rights need to recognize that calling for the strict enforcement of a handful of verses is the utmost hypocritical action. 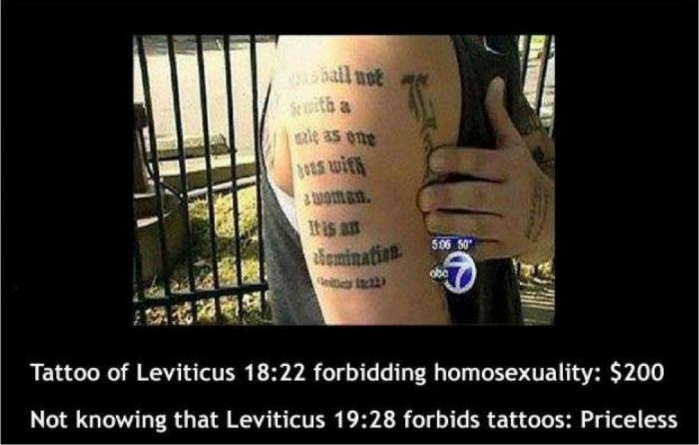 Science is not going away and cannot be ignored.
Biology affirms the premise that the “male”/“female” binary and heteronormative worldview are simply wrong. Non-heteronormative behaviors and families are observed in all species across the planet. Religions must find room for compatibility and discourse with scientific research.

While totally impossible and utopian to the core, my “New Years Resolution” (or more of a wish!) is that people will wake up, care, and realize how much nonsense they are fed every-single-day.

It is profoundly frustrating to see so many problems and tensions that could so easily be fixed–if only people cared and weren’t so scared.

Please see the following for more details on various points: