Home › Thoughts and Perspectives › Jane Sutcliffe, A Barack Obama Biography, and Looking at the Full Picture

Jane Sutcliffe, A Barack Obama Biography, and Looking at the Full Picture

Over the past several days various places on the Internet, places across political and educational spectrums, have been expressing outrage over the following two passages in Jane Sutcliffe’s biography of Barack Obama for children. 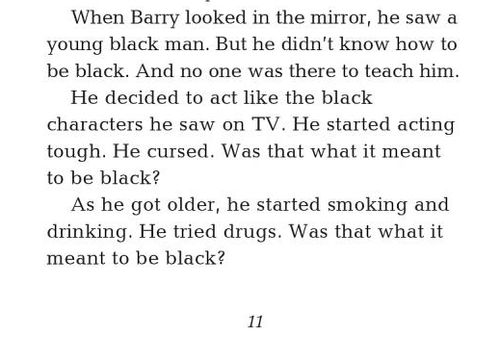 Indeed, I was concerned when I saw these passages. I read this news article and these reviews on Amazon. All of these assert that the book is racist, biased, and doesn’t belong in a classroom and should be burned. One says, it’s a book Hitler would like. Many accuse the book of rewriting history to make White people look bad.

As a scholar with a primary interest in racism, these accusations made me very interested in what was actually in the book–the entire book. I rushed ordered a copy so that I could write an article and get it out as soon as possible. Considering all of the attacks on the book, I fully expected the book to be worthy of much criticism.

Last night I opened the book and started reading it. And, to my delight, this book is not an attempt to rewrite history, it is not an attempt to show a distorted view of the President, White Americans, or of anyone else. It is a nice book. It is very obvious now that 90% or more of the people who have left reviews on Amazon have not actually read anything more than the two small excerpts going around the Internet. Apparently, Fox “news,” is also covering the story. And you know (or should know!) if Fox “news” covers it, it is not going to be accurate.

Context matters. Actually reading the book before having any opinion matters. And the drama around this book is a good reminder for all of us, including myself, that two passages do not represent an entire work.

The two passages “in question” are easily explained.

The first one focuses on: “He decided to act like the black characters he saw on TV…He tried drugs.” This is in the context of a discussion about Obama dealing with not having his dad in his everyday life, of dealing with people who made fun of him and his family- in the context of being a kid and trying to fit in and figure out who he was and wanted to be. The rest of the book goes on to explain how he overcame the mistakes with drugs (although the word “drugs” is never used again and the subject never discussed, which is important to mention considering the number of reviews that said they didn’t want their kids learning about drugs) and came to find an identity he embraced, happily embraced. Some might suggest instead of the specific drug reference, the author should have just said “mistakes” or something similar. Perhaps. Although, I remember as early as first grade we learned about the importance of being drug free and the risks people faced who did drugs. Drugs, studies show, are something many children will encounter- they need to be aware of the world around them. The only sentence that should be phrased a bit differently is, “But he didn’t know how to be black.” Something like, “But he didn’t know how to be what the media said black was” might be better. But, this is something I would have probably never noticed if I didn’t spend all day, every day studying language and culture.

The other passage people are angry about says: “…But white voters would never vote for a black president…” This is in the context of how Obama went from not being known to being know. It is in the context of his vision of change for the United States and the very real factor that for many Whites the skin hue of the person really does matter. It goes on to explain how he continued on anyway and was elected President. In this passage and elsewhere, the author simply recognizes the actual role of racism. By also saying that “But for Barack, speaking with white voters was just like talking with his grandparents,” the author also shows the absurdity of racialized divisions. The book does not (but certainly could have) discuss how all of the White Republicans have done everything possible for five years now to try and prevent the President from being successful.

My only concern with the book is that Obama is always called by his first name or his nickname. When the book discusses him as a senator, for example, it should call him “Senator Obama.” But I recognize that the majority (if not all) children’s books call their subjects by their first name. I also kind of wish there were more actual photographs instead of illustrations. That said, the illustrations are tasteful and in no way equate caricatures.

As one of the legitimate reviews on Amazon says, the President Barack Obama presented in this book is one who shows the “American Dream” is still a possibility. I think this is a readable book that children should enjoy and will find inspirational, especially those children who come from less privileged upbringings (read my articles and others’ articles about privilege and all of its nasty manifestations). Jane Sutcliffe deserves praise, not criticism, for the above reasons and because she discusses a much-discussed person without discussing politics or misrepresenting history. There is nothing in this book that should be controversial, noting is politicized.

Like Loading...
‹ Katy Perry and Neo-Blackface
“The Ghost of Columbus Haunts This World”: A Perspective on Thanksgiving ›