As a socially, culturally constructed celebration and more recently controversial holiday, Christmas tends to receive a great deal of attention from a variety of (dis)interested parties. In the blog article below, I primarily examine the rhetoric of It’s Beginning to Look A Lot Like Christmas and thoughts resulting from this thought process. Songs, like films, mirror their time in profound ways. Overall, I find that Christmas, even just examined as a secular holiday, is a highly racialzied holiday that promotes a very specific set of mores. 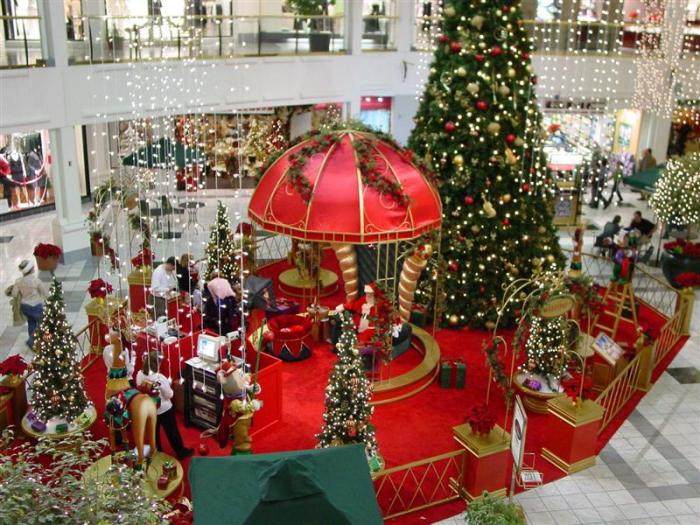 At our mall, they have been playing Christmas music for a week or two, and the Christmas lights have been up for a month (the picture from above is a different mall, btw)! As I was doing my almost daily mile walk, I was listening to the music off and on and the lyrics “and mom and dad can hardly wait for school to start again” caught my attention. This resulted in an analysis of the following stanza from It’s Beginning to Look A Lot Like Christmas.

A pair of hopalong boots and a pistol that shoots
Is the wish of Barney and Ben;
Dolls that will talk and will go for a walk
Is the hope of Janice and Jen;
And Mom and Dad can hardly wait for school to start again.

Check out the full song here or below. You can view the lyrics here.

This song (written in the 1950s) is another artifact that reveals what were widely considered to be unquestioned assumptions about not only the divide between male and female but also about their appropriate roles in life and in play. “Ben” may well enjoy a “doll that will talk” instead of toys celebrating the stereotypical (and totally false) conception of the Cowboy. Today we are generally much better of recognizing the socially constructed and subjective nature of gender, at least on the surface.

Additionally, none of the names used (Barney, Ben, Janice, and Jen) reflect the true diversity of names among the populace today or then. All are very “white,” too.

This song also assumes the nuclear family is natural. Although the “Leave it to Beaver” image dominates historical memory of the 1950s, families have long had a variety of manifestations in the United States. “Jen” may well have two Dads, or just a Mom, or live with Grandparents, or may be in an orphanage. If “Barney” has significant cognitive differences, in the 1950s, he might well have been locked in a hospital.

The next several words in the song assume that school (i.e., public school where children are sent 13-14 years for the majority of the day and are required to be quite for too often in many cases, such that they are at school more than with their family) is both natural and good. It assumes that “Mom and Dad” don’t actually like (and shouldn’t like) their children’s excitement for life and rowdiness when playing. This goes completely against biology- children (or people of any age for that matter) are not designed to be still and silent all the time.

Finally, snow for the vast majority of United Statesians is simply not a reality, either at Christmas or ever. Movies and songs virtually always and only promote visions of “white Christmases.” This tends to create unrealistically high expectations and unnecessary feelings of disappointment annually on December 25.

If we look at the song collectively and at all of the different things that indicate Christmas is coming, we can further see that It’s Beginning to Look A Lot Like Christmas only describes a very specific version of Christmas. In addition to omitting signs and symbols of a religious celebration of Christmas, it also completely ignores all of the sings and symbols from other holidays paralleling the timeline of Christmas that would also indicate it was almost Christmas. For example, Hanukkah is an important celebration, and is clearly part of the “Christmas holiday season.” Furthermore, a Menorah is much more a sign that Christmas is coming than snow, for example. Speaking of which, the strong tie of snow to Christmas is perhaps one of the strongest ties linking this holiday squarely to a Western/European tradition.

It’s Beginning to Look A Lot Like Christmas, then, is full of rich meaning about the attitudes of dominant culture. While the nation has indeed become demographically more diverse, the United States has always been a richly diverse body of mores among its peoples. To some of us today, the sexism and racism in this song are very clear. To others, not so much. We can safely assume the original writer of this song in 1951 and subsequent audiences for decades were unaware of their vastly layered assumptions about the world embodied in this song. The worldview illustrated and promoted by this song was so assumed and natural (again by dominant culture), they most certainly weren’t fully aware of what the song actually says and how much it excludes. This is the point at which the historical unconscious and historical memory become most fascinating.

Even today, though, the full richness possible during the holiday season is ignored. The United States has a population of roughly 320 million people. Christmas is only one of the holidays celebrated during the holiday season. Christmas trees and Santa are only two signs/symbols of this season. If the United States is ever going to actually be diverse and multicultural, it and its people will have to advocate for, welcome, and embrace a much wider variety of holidays. Furthermore, as has been argued elsewhere, it is problematic and a rampant manifestation of Christian/Western Privilege that Christmas, for example, is a national holiday and a holiday around which many school calendars have breaks but not any other cultural celebrations. 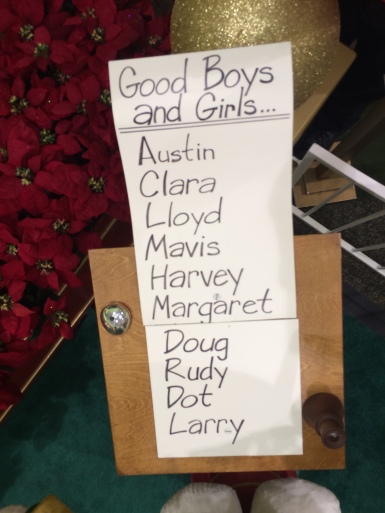 This is a picture I took at the Santa setup at a mall near where I live today. Notice the “whiteness” generally associated with the names.

All of this got me thinking about the ways in which dominant culture celebrates Christmas can also be read as a racist text or even a classist test–in addition to the exclusion of diverse names. Santa is always always racialized as white and is almost always performed by individuals also racialized as white. Moreover, think about the song I’m Dreaming Of A White Christmas. Have you ever looked at the actual words? Read the lyrics here. The song hardly mentions snow at all. It’s exclusively about events associated with the secular celebration of Christmas. The song describes a version of Christmas that could only potentially be enjoyed by those of a so-called “high culture” and “high class.” I think it is further ironic (and freaky!) that only individuals racialized as white sing the song in the movie by the same name.

“Race,” as used in society is always full of illogical ideas and contradictions. Nonetheless, the fact that Europeans (Western Protestant Europeans to be exact) have adopted the term “white” because it indicates “purity” and the connection with the signs and symbols of Christmas (such as snow, which is always presented and thought as pure white) cannot go without at least entertaining a variety of critical thoughts. As a result, I would potentially argue, they were singing about a “white christmas” without really meaning snow, even if unconsciously.

Check this article from another blog website for a perspective of ableism and Christmas.

See also from this blog:

See the full Hidden Power of Words Series postings, too!
13 Things You Can’t do (and be Honest) in the United States
Whiteness, History, and Comments about George Zimmerman
13 Tenets to Seeing and Understanding the World as a Scholar