Some Perspectives on Memorial Day

This is the first blog entry of many that I anticipate will involve articulating many sensitive issues. The ideas discussed here have been on my mind for sometime and are not entirely original, but these were on my mind more than usual this past Monday. 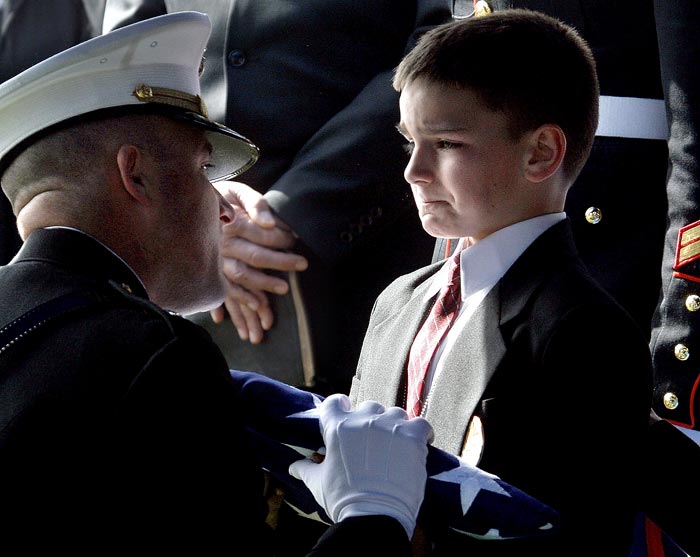 “Choking back tears, Christian Golczynski accepted the flag from his father’s casket. Photographer Aaron Thompson described this moment as ‘the most emotionally moving event I may have ever witnessed and may ever witness in my life’.”
From ABC News

Memorial day tends to present special concerns for those keenly aware of the troubled nature of war in the United States. On Memorial Day there were numerous reminders across social media and news outlets about the importance of honoring men and women sent to war but who never returned home. Without these men and women, these posts say, we would not enjoy the democratic and free life we love and take for granted.

While these individuals, of course, deserve to be honored and recognized for their efforts, there is seldom a discussion on Memorial Day or otherwise about war itself. As in widely known, the United States has almost always been at war. Many, though certainly not all, of these wars have had more to do with discriminatory, economic, and/or imperialistic motives than with actually protecting and spreading freedom. This juxtaposition of reality vs. ideal is generally well known and studied among historians and other social commentators. Our most recent and on-going military engagements in the so-called Middle East are only the most recent example. How, then, do wars, especially recent wars, serve to actually promote freedom at home or elsewhere? Is this the elephant in the room that no one talks about? Have are wars actually just become a way to promote the status quo?

We can and should still honor soldiers, but we should also criticize the government and not glorify violence so much. Soldiers, as I explain to my students, usually fight wars for completely different reasons than the governments that perpetuate and finance them. Men and women in various service branches serve to honor their country, to show patriotism, because notions of masculinity say you are supposed to, or because they feel a sense of duty, for example. Others serve because they have no choice and are forced to serve and have no way to avoid the draft, consider the Vietnam War. Others have few opportunities at “success” (whatever that is to him/her) or opportunity outside of military service. Soldiers (like the government) too are a product of their society and occasionally support wars at least in part because of shared prejudices.

Memorial Day is important – absolutely. But so too are wider conversations about the consequences of military action. We need to also remember the individuals who come home. Veterans’ Day presents similar opportunities for further discussion. Celebrations and ceremonies are important, but equally important are the conditions and obstacles veterans face when returning home. It is certainly not a smooth ride.

Memorial Day is by no means the only holiday that obscures larger realities. Our national holidays and discussions for that matter tend to celebrate the privileged few and perpetuate the notion of the United States’s greatness without recognizing problems or areas for improvement. These days tend to be problematic because they tend to ignore or obscure the surrounding problems and the reality that of irresponsible and greedy actions by the government.

So I leave you with questions to ponder and a quotation: What is the best way to honor soldiers? How can we give a true voice to those who have sacrificed theirs? Perhaps the truest way to honor soldiers, living and deceased, is to approach war much more carefully and to actually care for veterans. Remember too that people in all kinds of occupations with all sorts of different interest serve the nation.

“When our laws, our leaders, or our government are out of alignment with our ideals, then the dissent of ordinary Americans may prove to be one of the truest expressions of patriotism.”

Added Monday, May 27, 2019: In response to a WaPo OpEd article, I find myself today thinking about the students, teachers, protestors, trans people, and others who fight for and defend freedom at home in our everyday world. Some of these people die in the process. Why don’t we think about them on Memorial Day?